Setting the Stage for Your Startup’s Success Story

Setting the Stage for Your Startup’s Success Story

Take your business invention from inception to commercialization by participating in the Innovation Awards contest – the most lucrative business plan competition and capital acceleration opportunity in Florida. If your company has a product or service that can demonstrate leverage opportunities and create pathways to robust local job creation, you may have what it takes to compete for cash prizes ranging from $5,000 to $100,000.

During the two-day event on April 12 and 13, 2017, at the Hilton Pensacola Beach, experts will select companies to showcase their products and services before an audience of entrepreneurs, industry leaders, and potential investors and strategic partners.

From those companies, finalists will be selected to present before a live panel of judges competing for the top cash prizes. This year the contest has more opportunities to win by providing various cash award opportunities, including at least two prizes for pre- and post-revenue businesses, a veteran-owned business, and an entrepreneurial college or university student.

Get the visibility and capital your startup needs. Innovation Coast is funding at least two cash prizes: $20,000 for first place and $15,000 for second place.

Scaling up can be one of the most challenging parts of building a business. UWF’s Office for Economic Development and Engagement is funding two cash prizes: $100,000 for first place and $50,000 for second place.

The insights and skills veterans gain while serving our country can make an impact in the business world. To recognize these heroes, Innovation Coast is funding a $10,000 cash prize for a veteran-owned business.

To recognize the source of talent that resides in classrooms across the region, Innovation Coast is funding a $5,000 cash prize to an entrepreneurial community college or university student.

Pre- and Post-Revenue category winners must move to, expand to, or already be headquartered in one of the following Florida counties: Escambia, Santa Rosa, Okaloosa, Walton, Bay, Gulf, Wakulla or Franklin.

At the 2017 Innovation Awards, 12 exhibiting finalists will compete to win more than $200,000 in prizes. Get tickets now to be a part of this exciting 2-day event on Pensacola Beach.

Congratulations to the 2017 Innovation Awards winners!

IRIS: Intelligent Retinal Imaging Systems, first place, won $100,000. Jason Crawford, CEO of IRIS, said: “There is no doubt that winning the Innovation Award competition propelled our company forward. We have launched new customers and secured partnerships that are helping our company grow.”

After the competition, IRIS raised $750,000 and was selected to present at the Florida Venture Forum, a statewide organization. It also received matching funds from the Florida Institute for the Commercialization of Public Research
In 2015, IRIS received approval from the Food and Drug Administration as the first and only retinal telemedicine assessment service. The company also received the Companies to Watch Award and New Product Innovation Award in Diabetic Retinopathy.

Accountingfly, second place, won $50,000. Jeff Phillips, co-founder and CEO, said competing in the Innovation Awards benefited the company in several ways. “To prepare for the Innovation Awards we were forced to answer more detailed strategic questions than we had previously considered because we wanted to make the most of our opportunity. The cash prize helped us receive much needed cash to hire a top tier developer. But most importantly, placing second in the event validated Accountingfly’s business model and gave us the confidence to begin scaling.”

After the competition, strategic partnerships were signed with two major entities, which lead to significant increases in traffic and employers. The company signed a major partnership with the American Institute of CPAs’ Private Company Practice Section, a collection of more than 7,000 firms. Accountingfly also acquired GoingConcern.com, an alternative news site focused on the accounting profession.

After the competition, Robotics Unlimited received a $500,000 seed funding from private investors and the Florida Institute for the Commercialization of Public Research.

They developed OutRunner, a six-legged, remote-controlled robot that can run up to 20 mph for the New York Toy Fair. During this event, they successfully partnered with WowWee, an international company that focuses on breakthrough consumer technologies, to distribute their product worldwide.
With a goal to be a leader in the robotic toys industry, the company is now working on several exciting cutting-edge toy concepts that will be introduced at the 2016 Dallas Toy show.

Cognitive Big Data Systems, exhibiting finalist, won $20,000 in Microsoft BizSpark Plus Subscription. “Innovation plays a key role in economic development in Northwest Florida. I started Cognitive Big Data Systems to participate in the 2014 Innovation Awards competition,” said Lloyd Reshard, co-founder and CEO of the company. “I am excited to learn about the upcoming awards competition, and I strongly encourage local companies to participate.”

After the 2014 competition, Cognitive Big Data Systems received a $25,000 grant from Venture Hive Fort Walton Beach and received more than $150,000 in Azure cloud services from a partnership with Microsoft. In addition, the company was selected as a participant in PowerMoves Miami, an accelerator program that provided mentorship, support and access to capital.

Paracosm, presenting finalist, won $20,000 in Microsoft software and Azure services. Amir Rubin, founder and CEO, said: “The Innovation Awards was a great experience that helped us to connect with the Northwest/Pensacola tech community. Florida initiatives like Innovation Coast play a big part in strengthening our larger statewide ecosystem.”

After the competition, Paracosm raised $3.3 million seed funding from Atlas Venture and iRobot to expand its cloud-based 3-D mapping software.

Next Exit History, presenting finalist, received matching funding from the Florida Institute for the Commercialization of Public Research. Tim Roberts, partner and project manager, said: “The Innovation Awards competition was a key factor in the development of Next Exit History. Working with our team of business coaches greatly enhanced our own understanding of our business model and better prepared us to truly commercialize our product.

“The contacts that we made throughout the entire process have had far-reaching positive effects on our company and the overall experience greatly increased our potential for successful growth.” 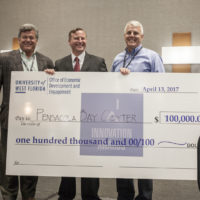 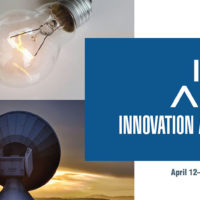 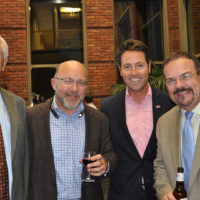 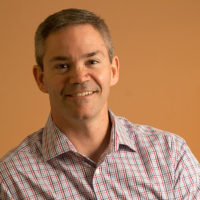 What is the Innovation Awards?

The Innovation Awards is the most lucrative business plan competition and capital acceleration opportunity in Florida with cash prizes ranging from $5,000 to $100,000.

When and where will the Innovation Awards take place?

What different prize categories are available to companies?

The contest includes various award category opportunities for pre- and post-revenue businesses, a veteran-owned business and an entrepreneurial community college or university student.

What different cash prizes are there available?

What are the qualifications for a pre-revenue business?

An entrepreneurial venture without a financial track record, usually in business less than three years. Also known as a seed or development stage company, with no prior sales. The purist form of a startup. Winners must move to, expand to, or already be headquartered in one of the following Florida counties: Escambia, Santa Rosa, Okaloosa, Walton, Bay, Gulf, Wakulla or Franklin.

What are the qualifications for a post-revenue business?

An established business concern with a track record of financial history, including demonstrable sales of products or services. Winners must move to, expand to, or already be headquartered in one of the following Florida counties: Escambia, Santa Rosa, Okaloosa, Walton, Bay, Gulf, Wakulla or Franklin.

What are the qualifications to enter the student category?

For this category, students must be a currently enrolled full-time undergraduate or graduate student in a two- or four-year accredited college or university. In addition, applicants must demonstrate a strong interest in entrepreneurship, innovation, and/or technology.

What are the qualifications to enter the veteran category?

For this category, individuals must have received an honorable discharge, be a National Guardsmen or Reservists, or be active duty within one year of separation. In addition, applicants must demonstrate a strong interest in entrepreneurship, innovation, and/or technology.

Who is eligible to apply?

Any company that has a product or service that can demonstrate leverage opportunities and create pathways to robust local job creation.

How much does it cost to register for the Innovation Awards?

Is paying the entry fee a hardship? Email info@innovationcoast.com and explain your situation. You may qualify for assistance.

When does registration open for the Innovation Awards?

What are the judging criteria?

How can my company benefit from participating in the Innovation Awards?

The Innovation Awards is a catalyst for business growth. Not only can you win a cash prize, ranging from $5,000 to $100,000, that generates an influx of seed capital, but you will be connecting with potential investors and networking with peers at the event.

My company is not located in Pensacola, Florida; can I still apply?

Yes, your company can apply. If your company is chosen as the winner, your company has 90 days to relocate or expand to one of eight counties, including Escambia, Santa Rosa, Okaloosa, Walton, Bay, Franklin, Gulf or Wakulla.

I’m a student or veteran applicant. If I win one of the prizes, do I have to relocate to one of eight coastal counties?

No, there are no relocation requirements for veteran and student prize winners.

Who is funding the Innovation Awards?

Innovation Coast and the Office of Economic Development and Engagement (OEDE) at the University of West Florida are funding the 2017 Innovation Awards as part of their commitment to fostering economic development and engagement across the region. OEDE is providing $150,000 to fund the first and second prizes in the post-revenue category, while Innovation Coast and other sponsors will be funding at least $50,000 for prizes in other categories.

I was a 2014 Innovation Award finalist/winner; can my company apply again?

Yes, companies who were finalists, exhibiting finalists and winners are eligible to apply for 2017 Innovation Awards competition.

Fill out the form below to sign up for information and updates about Innovation Coast and the Innovation Awards delivered to your inbox. We respect your privacy.

Innovation Coast reserves the right to extend the application deadline.